Above: Syrian refugees utilizing a charging station provided by NetHope.

For the past three years, Nikos Nassopoulos has seen the benefits that come with connectivity for refugees.

As NetHope’s on-the-ground representative in Greece, Nassopoulos has supported the organization’s mission to continue providing connectivity for the hundreds of thousands of Syrian refugees who still reside in settlements in Greece, giving them the opportunity to live a semblance of the lives they formerly held.

More than four million – mostly women and children – fled Syria beginning in 2015, landing in neighboring countries such as Turkey, Lebanon, Jordan, and Iraq. A vast majority landed in Greece following harrowing Mediterranean crossings, hoping for asylum or as a pass-through to other countries. But as the Syrian conflict has continued, many continue to be “stuck” in Greece, and now look for ways to establish their families, find work, educate their children , and check with family and friends who remain in their war-torn homeland.

Communications are critical to help refugees find this type of assistance. Many of the Syrian refugees were fortunate to escape with their mobile phones but needed the telecommunications infrastructure in the refugee settlements where they ended up.

For that reason, the NetHope-led Syrian Refugee Connectivity Alliance installed internet and charging station solutions in 98 sites in Greece, Northern Macedonia, Slovenia, and Serbia, with the majority in Greece between November 2015 and December 2016. With initial funding, technical and equipment assistance, and expertise provided by Cisco, Facebook, Google, Microsoft, and The Patterson Foundation, over one million users have benefited from these services which have been critical on these migrants’ long and perilous journey to safety and normalcy. With that original funding depleted, NetHope enlisted the help of the International Organization for Migration (IOM), a UN agency that oversees migrant and refugee programs around the world. 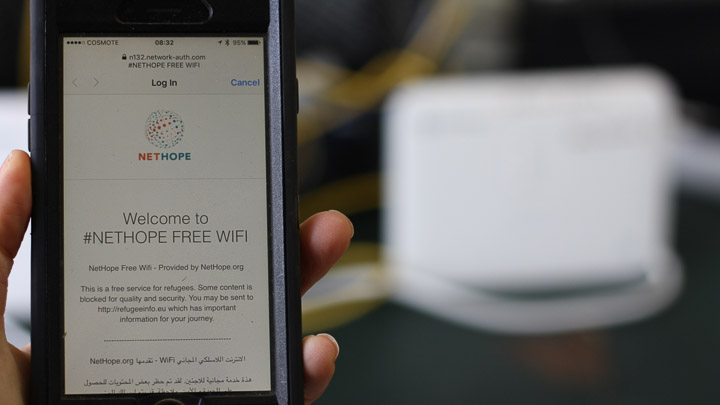 Nassopoulos, a Greek engineer, began working in these settlements in mid-2016 originally under the auspices of the IOM. His daily routine consisted of visiting settlements such as Malakasa, Thiva, Oinofyta, Ritsona, and Andravida to support beneficiaries with internet and Wi-Fi services, plus conduct computer lessons for children and adults. Beginning in April 2018, Nassopoulos then came under the employ of NetHope member Mercy Corps and then NetHope directly, daily checking the status of the NetHope-installed networks in the region of Attica, Greece, and to maintain, develop, and support internet connectivity and Wi-Fi networks.

“Beneficiaries have a great need for communication (via various platforms and applications, such as Facebook, Twitter, Instagram, etc.) with their relatives,” he emphasizes, “but also the need for amusement (music, videos, and movies).” Nassopoulos believes that maintaining the services that were initially set up helps the beneficiaries—people under very difficult conditions. The need for information--to communicate with their relatives, keep up with current news both globally and on their country, and find out about public services in Greece (maps, needed papers, hospitals, shelters)--is critical, but an equally essential part of life is the need to amuse and entertain themselves.

Nassopoulus also acknowledges the work of his colleague, Ilias Papadopoulous, an electrical engineer by training, who previously worked as a telecom engineer for one of Greece’s largest Internet Service Providers . He had been volunteering to support refugees as part of a church mission project. Ilias now works as a local NetHope Refugee Connectivity Coordinator, and Nassopoulus stresses “what an invaluable part of the team” he is.

For Nassopoulos, getting the opportunity to work in the field ensuring that the world continues to be accessible for the refugees was important to his professional background, but also his personal ethic. “I am a humanitarian,” he says proudly.

Read past posts on the Syrian Refugee Crisis: