'You definitely need to have faith in your overall mission'

In late January, I woke up to some long-awaited great news: Jean Marie Adrian, Program Director for Catholic Relief Services (CRS) in Niger, had finally received his 20 boxes of mobile phones. The phones, delayed by several months, were intended for use in CRS’s literacy intervention program, “Alpha a Base de Cellulaire” (Literacy by Cell Phone). Literacy by Cell Phone is one of 17 grantees of the 2017 NetHope Device Challenge, a collective impact subgrant program for nonprofits to advance their respective missions using phones, tablets, and other hardware.

As CRS prepared to receive the devices from the manufacturer last fall, the government of Niger began to enforce International Civil Aviation Organization regulations that ban transportation of mobile phones in cargo planes (cell phone batteries can sometimes cause problems on flights). As a result, CRS’s supplier had to reroute the delivery through neighboring Burkina Faso, incurring an additional 1,500 kilometers of overland transport. “You definitely need to have faith in your overall mission,” said Jean Marie, as he shared the above photo of the devices crammed into a taxi delivering the devices from the local bus station to the CRS offices in Maradi.

The mobile phones will be used as part of an innovative approach to improve literacy and numeracy among women and girls in rural Niger, a country with one of the poorest literacy rates in the world. Adolescent girls are especially vulnerable, since they are often married as early as 14 or 15, or are held back from school to assist with childcare and household chores. The CRS program is unique because learners in literacy groups use SMS messages to supplement their “regular” classroom literacy courses, as well as the built-in phone calculator for practicing numeracy. And, if they’ve attended the group courses without absences, the students receive their own mobile phones midway through the training.

Participants are set up for success, and incented to complete the program. The training courses are conducted in the local language, and women with children are provided educational childcare. The program also includes ongoing communications about hygiene, agriculture, health, and nutrition, and videos on these topics are filmed in the local villages and feature community members as actors. The literacy group trainer shares these videos via a battery-operated projector and facilitates discussions with the group. Participants also have the same videos loaded on their mobile phone memory cards so that they can share the content with their family and become a force for change in their communities. 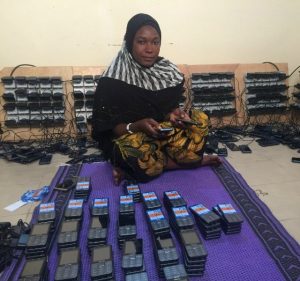 For two weeks, CRS was busy preparing the phones for handover to training participants. After opening, devices are inspected carefully, and then charged for 10 hours. After charging, the team (including intern Maimouna, pictured right) installed SIM cards in each device, and loaded content onto the memory cards. Imagine repeating this process 2,800 times! Pro tip: Make sure to keep the charged vs. uncharged phones recognizable by removing the stickers once the charging is complete.

With program sustainability in mind, CRS designed and deployed a solar charging unit that can support 20 devices at the same time. These charging units are stationed at public locations and local shops where community members can pay a small fee to charge their phones. This business model will also benefit the literacy groups, who own the charging units and can generate a small income. This, in turn, will pay for training supplies and the literacy trainer’s stipend.

Early reports from Jean Marie are overwhelmingly positive. After nearly a full two months of instruction, attendance among the 2,985 teenagers attending the course is at 100 percent. The young women are excited to receive the devices, and we look forward to sharing more once they’ve had a chance to integrate the phones into their daily lives. As for Jean Marie and team, they are happy to see their hard -- and sometimes tedious -- work paying off!

The overarching goal of the NetHope 2017 Device Challenge is to put more devices, including phones, tablets, PCs and laptops, into the hands of end users in vulnerable communities via impactful humanitarian and conservation programs. The program was created thanks to a $5.5 million grant award from Google.org, the charitable arm of Google. Grantees were selected from a highly competitive field of over 300 applications and include both NetHope members and other nonprofits.

Separate from the NetHope 2017 Device Challenge, NetHope launched the Devices for Impact program to provide visibility to the many worthy programs that are integrating digital devices into their activities. We’ve created a searchable database of humanitarian and conservation efforts seeking funders and partnerships to help move these projects closer to their goals. If you’d like to learn more about the great work that is happening in this space, are an NGO who would like to submit a project for consideration, or are interested in supporting the efforts via partnerships, funding or other collaboration opportunities, please visit NetHope’s Devices for Impact program page.