Refugee families long for a return to normal

Editor’s Note: Kelli Hogan, a marketing manager at Google, was a member of the 12-person NetHope Team K deployment to Greece and its official mission storyteller.

Lagadikia, Greece — We met Mohammed as soon as we arrived in the camp at Lagadikia. He is an electrician by trade, and when the NetHope team began the assessment to confirm our Wi-Fi installation plan, Mohammed gave us helpful tips about the camp's layout. He then invited us to sit down with his family and talk about their journey.

Mohammed lives with his wife Manal and their children in a shippng container — a new form of shelter found in refugee camps. Across from them are his nephew, Aham, and his family. They all left Aleppo in February 2016 and wait with uncertainty to find out where they might end up in Europe. Germany tops both families’ lists, but their main objective is to find a place where they can integrate, find jobs, and get their children enrolled in school. They are very grateful for the "fantastic support" they've received from the Greek government and people. One day they would like to return to Greece for vacation, but for now, they are ready to move on.

Like many refugees we've spoken to, internet is a basic necessity. There’s little to do in the camps without connectivity. Moreover, Mohammed remarks that it is essential particularly because of the conditions. In the winter, it's too cold to play outside, so, the children need to stay indoors. In the summer, it's extremely hot, which limits time spent outside, as well. His children depend on the web for games and entertainment, and the adults use it to communicate with their loved ones.

Mohammed and Aham's families also use the web to learn. Aham is teaching himself English and downloads language tutorials to study. The family watches many "how-to" videos on YouTube. They've been teaching themselves how to crochet and use YouTube to find inspiration for different designs and fashions.

The internet helps pass the time, but waiting is very difficult. "It's easier for the adults," explains Mohammed. "But my kids are now out of school for over two years. Life without education and work is nothing. We didn't leave [Syria] to sit down." The idleness is stifling. They long to return to normal routines.

A few rows down from Mohammed and Aham, I met Avin and her family. Our team was installing an access point directly above their container shelter. The family congregated outside, watching in anticipation. "When I first moved to the camp, I wished to live near an internet pole," Avin exclaims.

Avin is 20 years old. She is here with her parents, her aunt, uncle, and cousins. She has taught herself English through a self-curated mix of music and movies. She’s nearly fluent. She often lends her help as a translator to refugees in the camp. Throughout our conversation, she graciously pauses to assist the NetHope installation team with translations. In Syria she was in school for general studies and hoped to be a doctor, but now she fears it is an unattainable ambition. 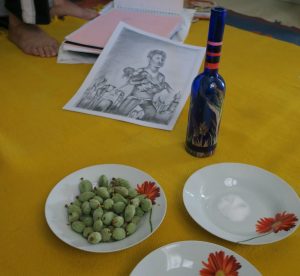 Her family left Aleppo over a year ago, and traveled through Turkey and Macedonia only to be rejected at the Serbian border. They spent a year in a camp in Macedonia before migrating to Greece. Her family is scattered all over: Austria, Germany, Holland, and some are left behind in Syria. Waiting in the camps is physically and emotionally exhausting. Her mother and aunt have lost their appetites. Her father uses art as an escape from the suffering.

The internet connection has been terrible, according to Avin, and therefore communication with loved ones outside the camp has been difficult. She eagerly awaits NetHope’s free Wi-Fi so she can get back to studying English and also talk to her brother through WhatsApp. We learn that she doesn't speak to any of her friends back in Syria. She hasn’t since she left, and has no idea if they are alive.

When asked what she hopes for, Avin tells us that she wants to leave the camp and return to normal life. More than anything, she cannot wait "to feel free." She has been fenced in for too long. Avin also wants to help dispel any misperceptions around refugees. "We are not dangerous. We're not trying to steal your jobs. We didn't want to leave. We are human, just like you."

The NetHope-led Syrian Refugee Connectivity Alliance was made possible by the support of Cisco, Facebook, Google, Microsoft, The Patterson Foundation, and UNHCR.