Editor’s Note: Kelli Hogan, a marketing manager at Google, was a member of the 12-person NetHope Team K deployment to Greece and its official mission storyteller.

Lagadikia, Greece — "Everything boils down to soft skills," says Rami Shakra, NetHope’s Director of Field Connectivity. Rami meets new people effortlessly: He's friendly, funny and, a deft listener, which makes it easy for him to integrate with the NetHope deployment team, refugees, and local organizations on site. Developing strong relationships with partners and affected communities gives him a better understanding of their needs, and he says it "makes it much smoother" to perform his work.

Rami joined NetHope just two months ago, and this was his first deployment to Greece to install free NetHope Wi-Fi in camps. He manages a similar connectivity project in Uganda, and joined the trip to Greece to support and learn from the team. Rami also happened to be the sole Arabic speaker of the group, so he spent a lot of time acting as a translator for me, facilitating conversations with refugees. Rami's tremendous empathy for vulnerable communities and passion for humanitarian work were clear during these very intimate conversations.

Rami is Lebanese and was born in Liberia where he spent most of his childhood. He studied telecommunications at Texas A&M University, and began his career as a network engineer. As his career progressed, he grew more interested in operations management. He has worked in the humanitarian sector and emergency response for 15 years with Plan International, Save the Children, and the World Food Programme, drawn to the challenging and rewarding work. "There's always a need. You can have a big impact even on a small scale, and that's rewarding,” he says. Emergency response is also where technology is needed most.

Prior to joining NetHope, Rami delivered connectivity in emergencies to humanitarian organizations in the Philippines; to medical teams responding to the Ebola outbreak in West Africa; and to refugees and supporting agencies in Northern Iraq. He joined NetHope because of its strong partnerships with corporations such as Cisco, Microsoft, Facebook, and Google, and because it provides a platform to take his work to the next level. “A global scale with bigger impact,” he says. 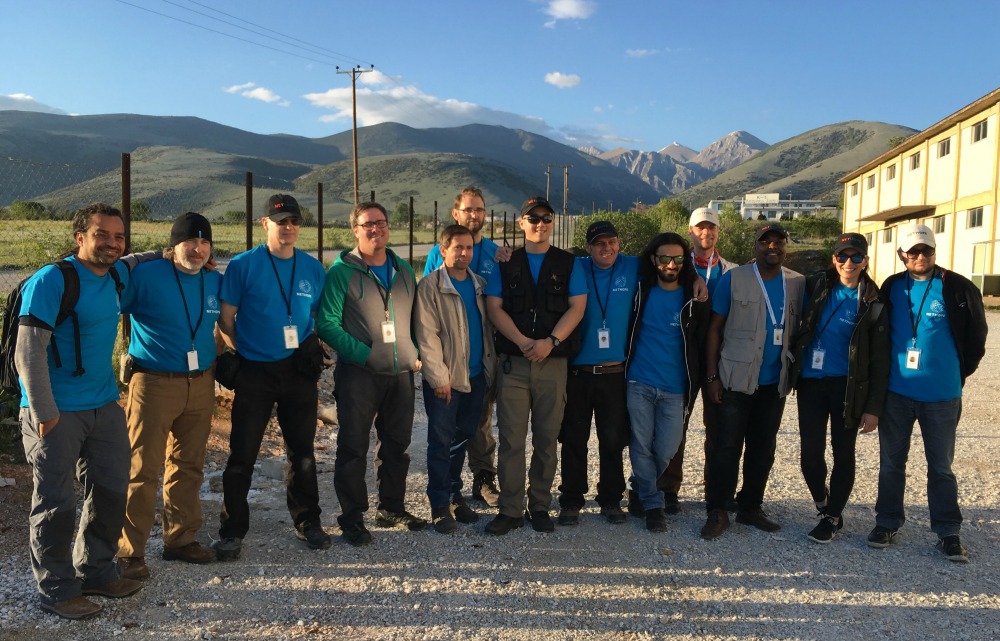 On this deployment, Team K was comprised of a core group of people from NetHope – the leading organization --  MercyCorps, Cisco,  International Rescue Committee, and Google.

Overall, the group’s experience spans network, mechanical, and electrical engineering. After an initial assessment of the camp each morning, team leads would confirm an installation plan and assign tasks to each person based on his strengths. Within two days, the group had meshed well, and become an adaptable and effective task force.

The model of these deployments is unconventional, which appeals to Rami, because “low overhead means endless scalability.” He explains that operational costs are relatively low because the technical solution itself is quite streamlined—the core hardware comes from Cisco and everything else can be picked up at local hardware stores. This makes for fairly swift and clean installations, and allows teams to cover multiple camps per mission; Team K’s goal is to reach 12. Additionally, only a small team of NetHope full-time staff is needed as they draw on the expertise of volunteers from our corporate partners for every mission. Rami has enjoyed watching different people from different backgrounds and companies come together to provide a simple solution to a very clear problem.

The NetHope-led Syrian Refugee Connectivity Alliance was made possible by the support of Cisco, Facebook, Google, Microsoft, The Patterson Foundation and UNHCR.