Volunteers in the region of Birkenfeld, Germany plan to teach refugees German and math using Google Chromebooks. And to help them get there, the volunteers are being tutored by Omar Azad Ahmad, a refugee from Syria, on how to use and manage the new laptops.

Ahmad (pictured right) is Kurdish, and hails from Qamishli, Syria, a city that has been devastated by deadly attacks and war atrocities in recent months. Ahmad graduated from a vocational institute in Syria as an assistant electronic engineer, and then studied telecommunications engineering in Aleppo for five years.

In October 2013, Aleppo was controlled by the rebels of the Free Syrian Army. From the northeast, the Islamic State was launching an initiative. From the south, the Syrian army advanced on Aleppo with support from allied militias. Food was running out, bombs rained down daily, and gunfire was constant. Ahmad feared for his life, and decided to leave Syria for Germany, where his younger sister had been working as a doctor for four years.

The 34-year-old Ahmad requested a three-month visa, and his sister supported his application. His visa was approved in November 2013, and Ahmad left by plane, from Beirut.

Nearly three years later, Ahmad has successfully passed a "B2 + Professional" German-language test, which makes him eligible for employment. Although Ahmad says he is “not good in languages,” he also speaks Kurdish, Arabic and English. He prepared for his German language exam with intensive training on the Google Chromebooks, provided to him by the Birkenfeld nonprofit organization Bir Inform e.V.

Beginning in April 2015, the nonprofit began funding a center for training and integration of refugees and asylum seekers in Birkenfeld, a small historical city amidst a densely wooded hill landscape in southwestern Germany. "This year we received 390 Chromebooks for our work for refugees through Project Reconnect from Google.org and NetHope," says Harald Lang, the founder and CEO of the association (at left in the picture above). "We will use these Chromebooks in institutions providing German language courses for refugees in Birkenfeld," he adds. 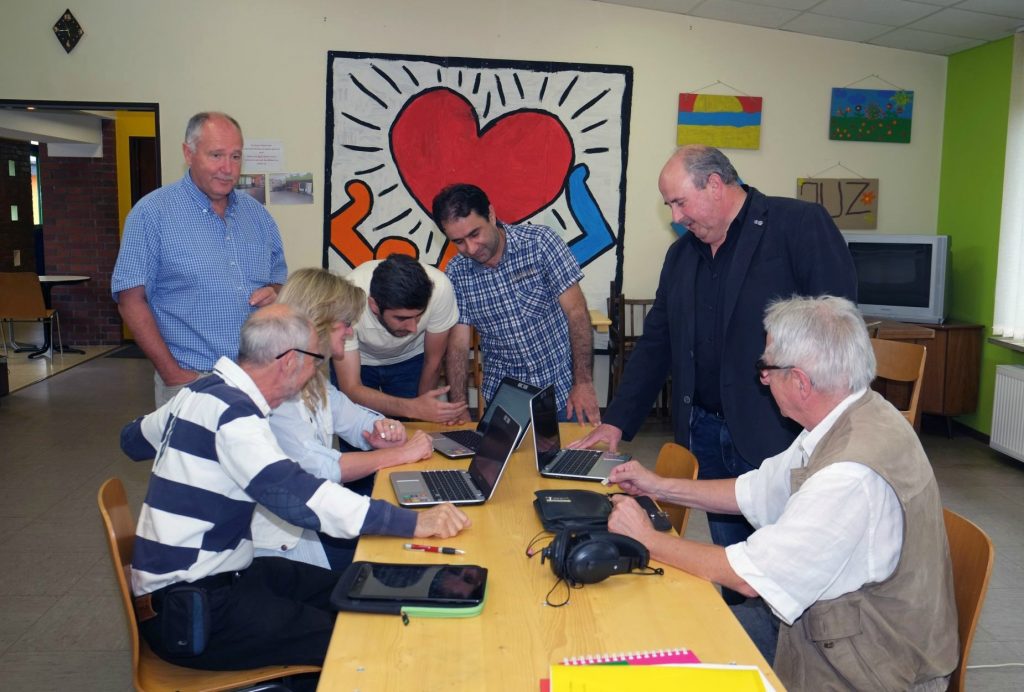 The Chromebooks are used by Bir Inform for refugee assistance programs run by social organizations and churches, private voluntary initiatives and programs for unaccompanied youths. Ahmad trains the German volunteers how to use the devices to more effectively, so that they will be better able to assist refugees in language-learning and other studies. They are integrated to complement teacher-led classes with online content, and for self-study online courses.

For situations when internet isn’t available, Lang has prepared memory sticks with 20 GB of language courses, videos, digitized books and dictionaries, so that refugees can continue their studies offline.

Ahmad is impressed with how welcoming and helpful the German people have been since he arrived. And he’s happy that he can pay some of that forward by supporting the activities of Bir Inform. He’s currently looking for work in telecommunications, and has already applied to several companies. His dream? To have a career as telecommunications engineer in Germany.