One of the newest member organizations of NetHope, the Norwegian Refugee Council has been advocating for refugee rights since its inception 70 years ago.

Established in 1946, in the aftermath of World War II, the Norwegian Refugee Council provides emergency response and aid to those fleeing war and persecution across 30 countries. That aid includes food, water and shelter, but also legal assistance and education. The Norwegian Refugee Council employs 5,000 people all over the world, many of whom were once refugees themselves.

Most recently, the Norwegian Refugee Council has worked to equip refugees in Europe with shelter, food security, and access to information; it has been particularly vocal about the EU’s response to the Syrian refugee crisis. The organization has also been active in East Africa, where a crippling drought has displaced millions, and conflict-ravaged Yemen, where eight out of 10 people are in need of humanitarian assistance.

The Norwegian Refugee Council joined NetHope in November 2015, and is committed to using Information and Communications Technology (ICT) in all aspects of its work, both in the field and at its headquarters in Oslo.

One of the Norwegian Refugee Council's recent projects harnessed renewable energy technology to meet a need of displaced people in Jordan. The organization installed solar hot water heating panels in Jordanian-owned buildings where Syrian refugees were staying to reduce rental costs. It also implemented a series of IT classes for Syrian youth at a refugee camp in Jordan.

Pietro Galli, who is the Head of Section for ICT development at the Norwegian Refugee Council, embodies the organization’s holistic and progressive strategy for IT solutions. Galli brings years of field experience in addition to his technological background, and understands not only the technical issues involved in IT but also their pragmatic applications in nonprofit programming. His appointment as Head of Section aligns with the organization's commitment to bridging the gaps between IT development and all other programs relating to humanitarian aid. 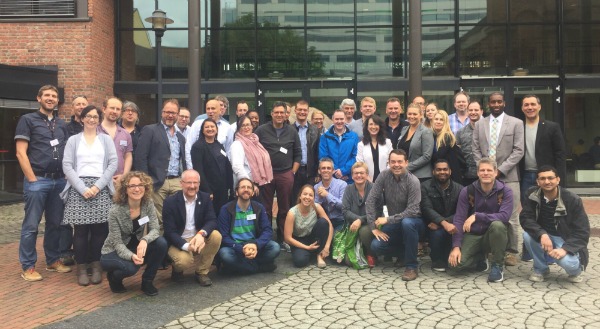 The Norwegian Refugee Council recently hosted the biannual meeting for NetHope’s European member organizations in Oslo. According to Galli, it was the largest European member meeting so far, with more than 60 people from 16 organizations. "It turned out to be a unique occasion to showcase NetHope to a large audience within NRC, including attendance from non-ICT departments," he said.

In keeping with its philosophy, the Norwegian Refugee Council organized the European members meeting to include not only the CIOs of each organization, but also program leaders from other types of projects. A key highlight was the presentation on the enterprise architecture framework efforts carried out by SOS Children's Villages International, Save the Children and WaterAid. The first framework draft clearly resonated with the participants and three member NGOs immediately signed up for the next stage of testing and refinement.

"Unfortunately the Oslo weather wasn’t good enough to take people for a dive in the fjord," said Galli. "However, we enjoyed hosting this event and shared a bit of 'our Oslo' with friends from other NetHope member NGOs. The next time we meet will be in Atlanta and all of us look forward to that!"